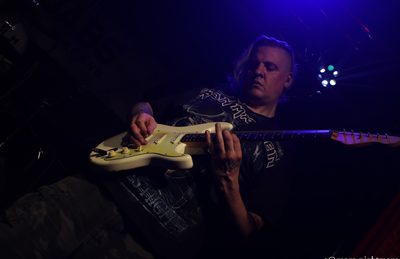 ﻿Nico Pitzer is a professional german guitar player, composer, college instructor & teacher in his own school. He also teaches online using Skype or Google Hangouts. As a sideman and guitar player for hire, he plays with many different artists and has his own band called Nico Pitzer Band.

He studied with awesome musicians such as Prof. Michael Sagmeister, Roman Klöcker, Prof. Rick Peckham, Prof. Bruce Saunders and Prof. Robin Stone during private lessons and during his completion of the certificate program - berklee college of music.

Nico Pitzer is a varied player with high technical and theoretical skills for any style of music. Altough he´s primarily a rock player, Nico is highly influenced by and educated in Jazz as well.

Nico Pitzer is also a composer and producer. His main focus is orchestration and soundscapes beside writing & arranging songs for artists.